I’m highly disappointed with the finale of Dexter’s last season. Before i go on talking about what the hell happened let me answer a simple question “why i was avoiding blogging for past few days?”… Answer is simple – I don’t know.

Now that you know that i don’t know lets go back to Dexter. Its juts crazy how you have this very brilliant, out of ordinary and out of box concept of a serial killer who kills only bad guys, who is struggling to be normal around family and friends who adore him for he is nothing but a sweet geeky guy who loves bowling and boating. And then, you just screw it all in the end.

Past few days i have been busy doing nothing but watching back to back episodes of The Killing because im obsessed with it. Let’s be honest im scared now, what will be the finale of The Killing, Pretty Little Liars, Grey’s Anatomy, Castle and Vampire Diaries. Dexter broke my heart into a million pieces and in ways that i am scared about same happening by other shows. I thought  it’s just me, then my brother said the same thing and then i checked internet and saw everyone is saying the same thing. Why Dexter why. 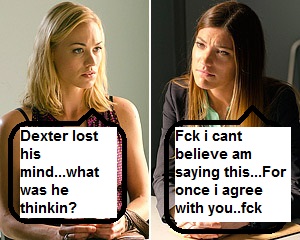 I totally hate the way they handled things with Debra Morgan. Bad way to kill her character, of course i didn’t wanted her to die but if they had to kill her …Dude! Throwing her in sea? What’s got into you Dexter? Dark Passenger or Dumb Passenger? I get the whole idea of not letting your sister suffer, but couldn’t you just take out the ventilator system and leave Deb there?

I mean What the F…I was totally disappointed with the ending of Prison Break but what Dexter did is super sad. Two most extraordinary shows ended in most sloppy ways. Totally crazy.